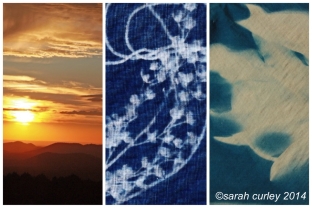 Sarah S. Curley was educated in the East, worked in Manhattan for 10 years, and moved to the Midwest and, later, Arizona where she currently resides.  At an early age, she began an exploration of photography and painting.  Initially focusing on realism to express her connection with nature, she has progressed modern art as a means for her expression of, and interaction with, form, color, texture, and line.

The experience of moving beyond personal loss has been at the core of her work for many years.  She has found that creating compositions, initially without camera optics, has helped her to understand the emotions involved with loss, and to move beyond them.  The color blue has been the unifying element in her current “Trilogy Series,  A Path to Renewal.”  The color blue may evoke feelings of depression, loneliness, and that which is unknown.  However, the color may also reflect, along with the use of pastels or colored pencils, acceptance of loss, joy, and hope.  Her images evolve from a dark, murky ocean feel to light, nuanced designs representing an evolving spirit.

She has been juried into The Sonoran Arts League (alternative photography) and The Gallery at el Pedregal, on Scottsdale Road, Scottsdale, AZ.  Over the next few months, she will be opening her new studio, with a group of artists, at Stagecoach Village, Cave Creek, Arizona, and creating a new fine art website.  Her current work may be viewed by contacting Alliance Francaise of Greater Phoenix, Scottsdale, Arizona.

Over the years, she has been in a number of national juried shows.  In 2013, 2014, 2015, 2016, and 2018, her work was exhibited in Light Sensitive, a National Juried Exhibition, featuring alternative photographic processes, at Art Intersection Gallery, Gilbert, Arizona.  In 2014, her work was selected to be exhibited in the 18th Annual “Lines Into Shapes” National Juried Art Show & Sale, at the Art Center of Estes Park, Estes Park, Colorado.  In 2015, she was part of the “Force of Nature” Juried Show at the Shemer Art Center, Phoenix, Arizona.  She was also the primary artist at the University Club, Phoenix, AZ, with 30 landscape and inkjet prints of cyanotype-on-silk fabric on display and for sale during May and June of 2016.  She is currently a member of the Sonoran Arts League, Cave Creek, AZ, is a sponsoring member of the Art Intersection Gallery, Gilbert, Arizona, and a member of Arizona Photography Alliance.